Celebrities Who Have Worn Invisalign 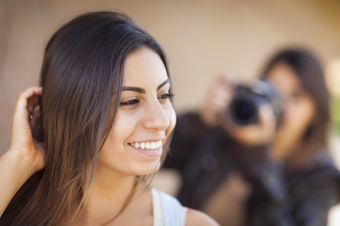 The primary benefit of Invisalign is that it’s invisible when worn, and this makes it the perfect orthodontic treatment choice for celebrities who are constantly in the spotlight.

If you’re thinking about trying Invisalign to straighten your smile, you might be interested to learn about the experiences of others. Here are a few celebrities who have undergone successful Invisalign treatment.

Serena Williams has a winning smile to match her her 13 Grand Slam Doubles wins. Her dazzling smile can be attributed to having undergone Invisalign treatment at the age of 16.

Justin Bieber has been very open with the public about his use of Invisalign and his satisfaction with the results. He even aired a variety of YouTube videos in which he showed his aligners and talked about his experience wearing his Invisalign aligners.

Tom Cruise has always been well known for his smile, but during a visit to the orthodontist with his kids, he learned that his front teeth were not, in fact, perfectly centred. As a result, he decided to undergo Invisalign treatment to perfect his smile.

As a young woman, Katherine Heigl had a somewhat misaligned smile. Leading up to her wedding, she decided to correct these issues, but not wanting to be bothered with metal braces, she turned to Invisalign. In an interview with Extra, Katherine she discussed her use of Invisalign in 2007, prior to tying the knot. Pleased with the process and the results, she dubbed them “Netflix for your teeth.”

Eva Longoria was dissatisfied with her bottom teeth, which overlapped slightly. During an interview with InStyle magazine, she revealed that she was using Invisalign to align them.

Oprah has been spotted wearing Invisalign aligners on her show. Her smile is beautiful, and it would seem that this is in part, at least, due to her Invisalign treatment.

It’s hard to find fault with Gisele Bundchen’s appearance, but she has had misalignment problems in the past. One of her teeth started shifting out of position, creating a shadow when she smiled. This obviously wasn’t going to fly with her job as a model, and so she decided to undergo Invisalign treatment to correct the problem.

Zac Efron didn’t always have the perfect smile he has today! Zac once suffered from a condition called diastema, which is a gap between the incisors and the molars. He turned to Invisalign to treat this problem, and now, it’s impossible to tell it was ever an issue.

The Kardashians are a very image-focused family, and so when Khloe needed orthodontic treatment, Invisalign was really the only option! Over a relatively short treatment period, Invisalign straightened her teeth without the press being any the wiser. These days, she’s got a dazzling smile that always looks great!

If you have questions about how Invisalign can help improve your smile, contact our Surrey dentists today to book a consultation.

If your smile isn't as bright as it used to be, you may be wondering whether you should try a store-bought teeth whitening treatment, or whether visiting your Surrey dentist for professional teeth whitening would give you better results.

Our Surrey dentists understand how challenging day-to-day life can be for patients dealing with the effects of sleep apnea. Here are a few tips that may help you to live well after being diagnosed with mild sleep apnea.